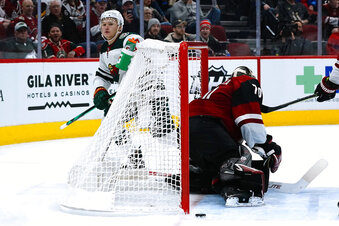 GLENDALE, Ariz. (AP) — Kevin Fiala had a goal and two assists, and the Minnesota Wild beat the Arizona Coyotes 5-2 for their fourth straight win. Joel Eriksson Ek, Marcus Foligno, Dmitry Kulikov and Kirill Kaprizov also scored for the Wild. Kaapo Kahkonen stopped 23 shots while starting for the second straight game. Minnesota has scored five goals in all four games of its streak. Shayne Gostisbehere had a goal and an assist — giving him points in his last two games — and Andrew Ladd also scored for Arizona, which trailed 2-0 after 9 minutes. Scott Wedgewood replaced Karel Vejmelka in goal in the third period for the Coyotes (1-11-1). Vejmelka finished with 17 saves, and Wedgewood stopped all eight shots he faced.