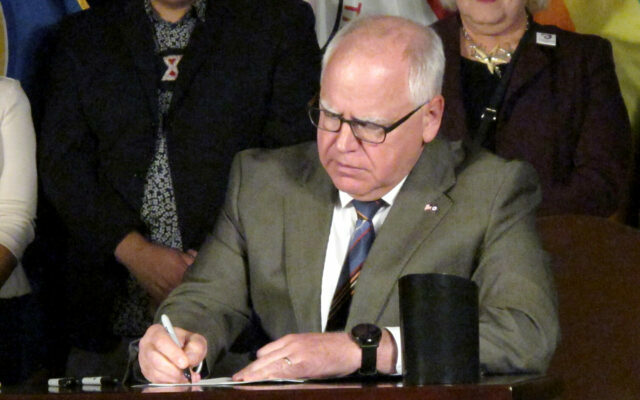 Minnesota Gov. Tim Walz signs a ban on so-called conversion therapy during a ceremony at the State Capitol in St. Paul, Minn., on Thursday, July 15, 2021. Walz said conversion therapy, the scientifically discredited practice of using therapy to "convert" LGBTQ people to heterosexuality or traditional gender expectations, is a "byzantine, tortuous practice." He said his order empowers state agencies to ensure that no Minnesotans under age 18 are subjected to it, and that insurance companies and state health plans don't cover it. (AP Photo/Steve Karnowski)

Walz says his action should help shield people seeking or providing abortions in Minnesota from facing legal consequences in other states. The Supreme Court’s opinion to reverse Roe v. Wade immediately halted most abortions in South Dakota and Wisconsin and enacted a trigger law to end abortions in North Dakota after 30 days. Abortion remains legal in Minnesota.

Walz has vowed to reject requests to extradite individuals who are accused of committing acts related to reproductive health care that are not criminal offenses in Minnesota.