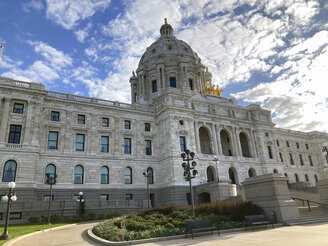 Clouds float over the Minnesota State Capitol in St. Paul, Minnesota, on Monday, May 23, 2022, hours after the divided Minnesota Legislature blew a deadline for passing a package of tax cuts and new spending using the state's massive budget surplus, leaving the next steps uncertain for lawmakers and Democratic Gov. Tim Walz. (AP Photo/Steve Karnowski)

ST. PAUL, Minn. (AP) — Gov. Tim Walz has signed an agriculture funding bill that includes drought relief for farmers, investments in rural broadband and support for beginning farmers. The Legislature passed the bill Sunday in the closing hours of the 2022 legislative session. Minnesota farmers have been struggling this spring with wet ground that has delayed planting. But the bill includes $18.4 million in relief for losses caused by last year’s drought. That includes $13.1 million for affected farmers, plus $5 million for the Department of Natural Resources to replace drought-killed seedlings and support reforestation. It also includes over $200 million for broadband development.