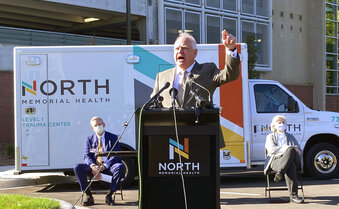 Minnesota Gov. Tim Walz announces measures on Friday, Oct. 15, 2021, to use the Minnesota National Guard to alleviate staffing shortages at health care facilities that have been hit hard by the COVID-19 surge. The governor spoke outside North Memorial Health Hospital in the Minneapolis suburb of Robbinsdale. (AP Photo/Grant Schulte)

MINNEAPOLIS (AP) — Minnesota’s Democratic Gov. Tim Walz has launched his campaign for a second term in an increasingly divided state, saying he made the tough calls necessary to beat back the COVID-19 pandemic and revive the economy. The former high school football coach made the announcement in a YouTube video posted Tuesday that shows him standing on a football field. The former congressman won office in 2018 on a theme of “One Minnesota,” a slogan he’s using again for 2022. But the fissures in Minnesotan politics have grown deeper since then, mostly over disagreements over his management of the pandemic, as well as the unrest and spike in crime that followed the death of George Floyd.