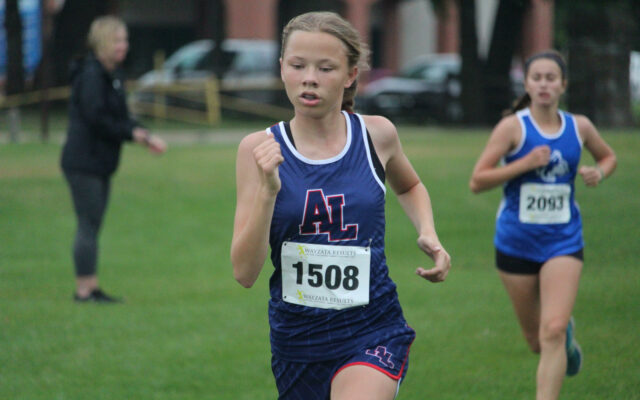 (Story by Co-Head Coach Jim Haney) (Pictured Elle Schultz ran the 5000m Varsity Girls race in 22:35)
Star Runner Boys Gavin Hanke
Star Runner Girls-Jai Maligaya
Team place Boys 9th/15
Team place girls Inc
Comments-The Albert Lea CC team participated in the Faribault meet and the coaching staff was very pleased with the progress the team made by time and place.  Faribault is a flat course and times should have been better, what was most encouraging was the amount of time the team took off from the previous races.  This week we worked on speed for the flat course and it has paid off as the team used the speed portion of running to compete at a high level with some of the top teams in southern Minnesota and in the state.
The coaching staff has asked a great deal of the runners and the runners have responded to the challenges that coaching staff have presented.  All runners are running with confidence and drive because they know that they are talented but not yet satisfied with the results.  The one aspect that makes the 2022 team special is that they push each other to be better and that has paid off so far this season.
Boys-leading the way for the Tigers was Gavin Hanke in 9th place with a time of 16:44.  Gavin is a very talented runner and he demonstrated this again in a talented field of runners.  We had the goal of a top 10 and Gavin accomplished this.  The rest of the team score was Ty Stout 36th place in 17:50, Pacey Brekke in 61st with an 18:30, Luke Wangsness in 65th at 18:35 and Andrew Tscholl 68th place at 18:45.  A very strong effort and we look forward to continued improvement.
Girls-The girls were led by Jai Maligaya with a time of 22:28 in 54th place followed by Elle Schultz in 55th place with a time of 22:35 and finally Mya Hanke 79th in a time of 24:04.   The girls continued to drop time and showed improvement.  This is very encouraging for the coaching staff as later in the season when we will have complete time.