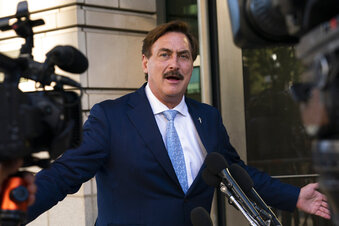 FILE - MyPillow chief executive Mike Lindell, speaks to reporters outside federal court in Washington, June 24, 2021. Lindell, who has organized or attended forums around the U.S. peddling conspiracy theories about voting machines, said earlier this week that he had received a subpoena from a federal grand jury investigating the breach in Colorado and was ordered to hand over his cell phone to FBI agents who approached him at a fast-food restaurant in Minnesota. (AP Photo/Manuel Balce Ceneta, File)

WASHINGTON (AP) — The Supreme Court says it won’t intervene in a lawsuit in which Dominion Voting Systems accused MyPillow chief executive Mike Lindell of defamation for falsely accusing the company of rigging the 2020 presidential election against former President Donald Trump. As is typical, the high court did not say anything Monday about the case in rejecting it. Monday is the first day the high court is hearing arguments after taking a summer break. Lindell is part of a case in which Dominion also accused Trump allies Sidney Powell and Rudy Giuliani of defamation for falsely claiming that the election was “stolen.” The Denver, Colorado-based Dominion has sought $1.3 billion in damages from the trio.