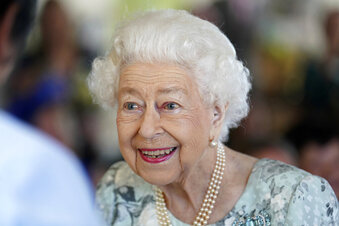 FILE - Britain's Queen Elizabeth II looks on during a visit to officially open the new building at Thames Hospice, Maidenhead, England July 15, 2022. Buckingham Palace says Queen Elizabeth II is under medical supervision as doctors are “concerned for Her Majesty’s health.” The announcement comes a day after the 96-year-old monarch canceled a meeting of her Privy Council and was told to rest. (Kirsty O'Connor/Pool Photo via AP, File)

LONDON (AP) — Buckingham Palace says Queen Elizabeth II, Britain’s longest-reigning monarch, has died at age 96. Elizabeth spent seven decades on the throne as the U.K. rebuilt from war, lost an empire, transformed its economy and both entered and left the European Union. Upon the queen’s death, her 73-year-old son Charles automatically becomes monarch, even though the coronation might not happen for months. Elizabeth was a constant presence, the only monarch most Britons have ever known. She likely met more people than anyone in history, and her image, which adorned stamps, coins and bank notes, was among the most reproduced in the world. But her inner life and opinions remained largely an enigma.