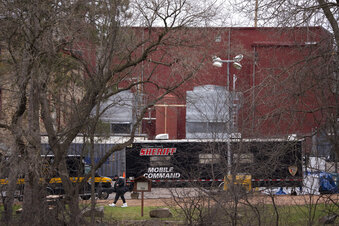 The Chippewa County Sheriff set up a mobile command center in the parking lot of the Leinenkugel's brewery as they process the scene where 10 year-old Iliana "Lily" Peters was found dead in Chippewa Falls, Wis., Monday evening, April 25, 2022. Peters was found dead in a park earlier in the day after being reported missing the night before. (Jeff Wheeler/Star Tribune via AP)

CHIPPEWA FALLS, Wis. (AP) — Police investigating the death of a 10-year-old girl in western Wisconsin say they’ve arrested a juvenile suspect known to the victim. The body of Illiana “Lily” Peters was found Monday morning near a walking trail in Chippewa Falls. Police said her death was a homicide. Chippewa Falls Police Chief Matthew Kelm during a brief news conference Tuesday evening declined to provide the age or sex of the suspect, whether the suspect was related to Lily or where the arrest occurred. He said there was no longer any danger to the public. Kelm says officers executed a search warrant at an address in the block where Lily had gone to visit her aunt on Sunday, when she went missing.