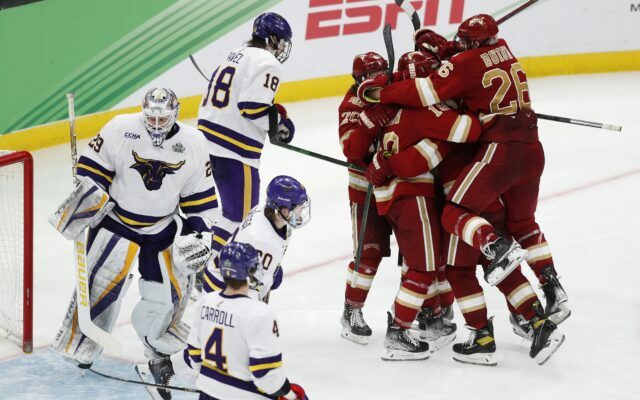 By JIMMY GOLEN AP Sports Writer
BOSTON (AP) — Ryan Barrow and Mike Benning scored less than three minutes apart to give Denver the lead and the Pioneers awakened with five goals in the third period to rally past Minnesota State 5-1 and claim their record-tying ninth college hockey title.

Denver joined Michigan as the only schools with nine championships. Magnus Chrona stopped 27 shots for the Pioneers. They won it all for the first time since 2017.

Minnesota State took a 1-0 lead on Sam Morton’s first-period goal and outshot Denver 18-8 in the first 40 minutes. But Barrow slid a rebound of Benning’s shot through the legs of Hobey Baker Award winner Dryden McKay five minutes into the third. And Benning gave the Pioneers the lead. Denver added one more goal and a pair of empty-netters to clinch it.