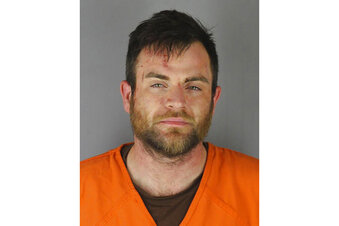 FILE - This undated photo provided by the Hennepin County, Minn., Sheriff's Office shows Nicholas Kraus. Kraus, the man who drove his SUV into a crowd of protesters in Minneapolis last year while intoxicated, killing one and injuring several others, pleaded guilty on Monday, Oct. 24, 2022, to murder and assault just as his trial was set to begin. (Hennepin County Sheriff's Office via AP, File)

MINNEAPOLIS (AP) — A man who was intoxicated when he drove his SUV into a crowd of protesters in Minneapolis last year, killing one and injuring several others, has pleaded guilty to murder and assault. This happened Monday as his trial was set to start. Nicholas Kraus, in a plea deal with prosecutors, admitted to killing one of the protesters who had been demonstrating in June 2021 after members of a U.S. Marshals Service task force fatally shot Winston Boogie Smith Jr., a 32-year-old Black man. Prosecutors said Kraus was visibly intoxicated when he sped up and tried to “jump” a car being used as a protest barricade and ended up pushing it into the crowd.