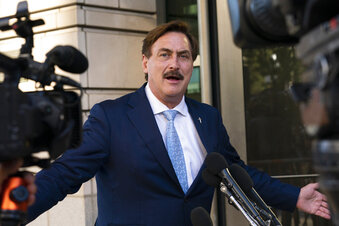 FILE - MyPillow chief executive Mike Lindell speaks to reporters outside federal court in Washington, Thursday, June 24, 2021. On Tuesday, Sept. 13, 2022, Lindell said that federal agents seized his cellphone and questioned him about a Colorado clerk who has been charged in what prosecutors say was a “deceptive scheme” to breach voting system technology used across the country. (AP Photo/Manuel Balce Ceneta, File)

MINNEAPOLIS (AP) — MyPillow chief executive Mike Lindell has sued the Department of Justice and the FBI to demand the return of a cellphone seized from him at a fast food restaurant in Minnesota last week. Agents apparently seized it as part of an investigation into an alleged scheme to breach voting system technology. Lindell alleges in the complaint, filed Tuesday in federal court in Minnesota, that the confiscation violated his constitutional rights. Lindell is a prominent promoter of false claims that voting machines were manipulated to steal the 2020 presidential election. He asked the court to order the return of his phone and to prohibit authorities from using data from it.