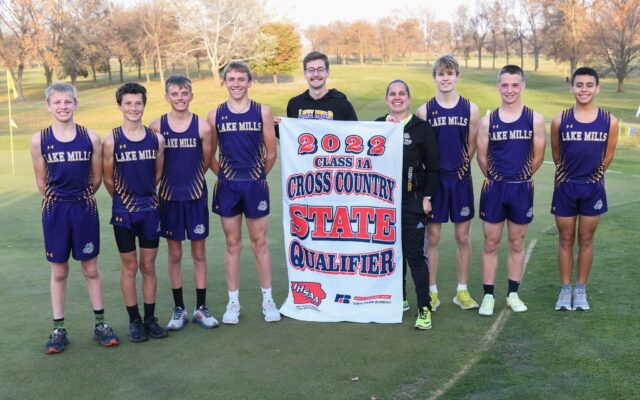 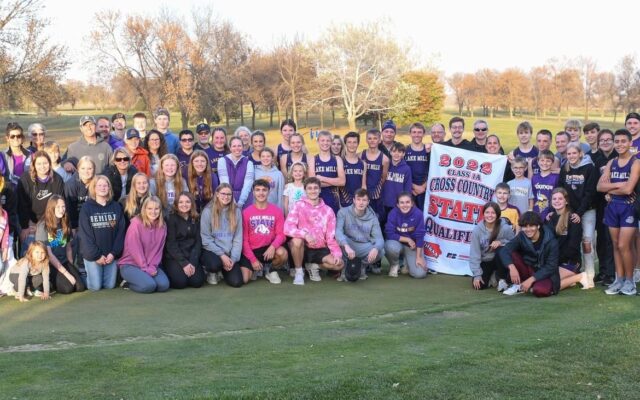 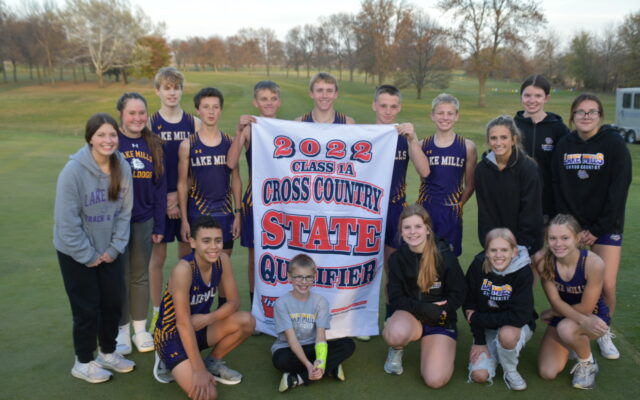 The Lake Mills Boys Cross Country Team punched their ticket to state with a 2nd place finish at the State Qualifying meet on Thursday, 10/20/22.  They edged out Newman Catholic by 1 point, to finish in second place to get their first Cross Country Team State appearance in school history!  Newman Cathlolic defeated Lake Mills at the Conference meet a week before by 9 points.  Lake Mills knew they had to come out strong, find the two teams they expected to be competing against and stay close or pass them, and remember that every runner is important as each one could be a point for or against our team score.

Justin Rygh finished 2nd with his second best time of the year, 16:24.60, just over a second behind Newman Catholics, Ryan Kelly.  Knute Rogne beat his PR by 16 seconds with a 17:21.31, to close the gap between himself and Newman’s Joey Ringo, and in doing this passed another runner at the finish line to be right behind Ringo with a 6th place finish.  Both of these Bulldogs qualified for State as an Individual.  Finishing third with a 15th place finish, was Kade Van Roekel with a time of 18:04.39, 24 seconds better then his previous PR.  This edged Newman’s 3rd runner who finished in 18th place.  Newman’s 4th runner finished in 20th, 2 spots in front of Lake Mills Hayden Thompson, who had a 4 second better PR run of 18:48.39.  It came down to Lake Mills and Newman’s 5th runners.  Lake Mills’ Stephen Brandenburg finished in 27th with a PR time of 19:00.17 (14 seconds faster then his PR).  The final Newman runner finished 3 runners behind Stephen, but 2 didn’t count towards team scores, so officially he was only 2 points behind Stephen.  With all these hard fought runs and close finishes, the final results had Lake MIlls winning by 1 point, and earning their first trip to state as a team.
The Lake Mills boys ran so hard and gave everything they had to have a chance to beat Newman and go to State.  It has been a point of conversation since day one, that this team may have a chance if they focus on each day, don’t give up, and keep working hard.  They were supported by so many people, including the Lake Mills High School girls team who has been there everyday at practice and in meets, supporting them along the way.  The unique situation of having boys and girls together practicing and competing at the same location has created a close bond, where each member supports each other and understand the hard work that has been put in.  The girls State Qualifying was difficult, but 2 runners scored PR’s, Anna Stene and Madison Johnson.  Josie Helgeson finished her one season of Cross Country with many medals and a 2nd team All-Conference award.  All the girls ran hard all season and saw a lot of time come off their 5k times.  I’m very proud of their effort, and look forward to working with most of them again next season.
The boys run in the 1A State Race on Friday, October 28 at 11:15 am at the Lakeside Municipal Golf Course in Fort Dodge, IA.