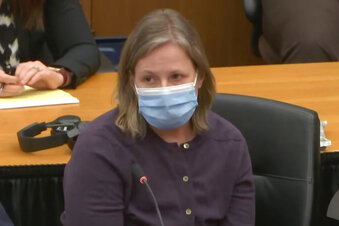 In this screen grab from video, former Brooklyn Center Police Officer Kim Potter listens during a sentencing hearing Feb. 18, 2022 at the Hennepin County Courthouse in Minneapolis. Potter, who said she confused her Taser and her handgun before shooting Wright during a traffic stop, was convicted of first- and second-degree manslaughter in Wright. (Court TV via AP, Pool, File)

MINNEAPOLIS (AP) — The former suburban Minneapolis police officer who said she confused her handgun for her Taser when she fatally shot Daunte Wright has been sentenced to two years in prison. Kim Potter was convicted in December of first- and second-degree manslaughter in the April 11 killing of Wright, who was Black. The sentence issued Friday is below the range of six to 8 1/2 years in prison recommended by state guidelines. But Judge Regina Chu found mitigating factors exist that gave her the authority to go lower.