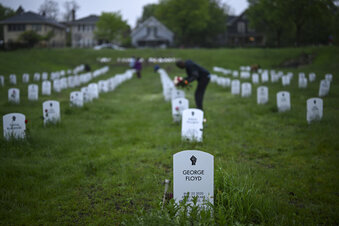 Community members lay flowers down near gravestone markers at the 'Say Their Names' cemetery Wednesday, May 25, 2022, in Minneapolis. The intersection where George Floyd died at the hands of Minneapolis police officers was renamed in his honor Wednesday, among a series of events to remember a man whose killing forced America to confront racial injustice. (Aaron Lavinsky/Star Tribune via AP)

MINNEAPOLIS (AP) — A judge has rescheduled the state trial for two former Minneapolis police officers in George Floyd’s killing to Oct. 24 to resolve dueling requests for a new trial date. The state had sought to start as soon as this summer while a defense lawyer asked to delay it to next spring. Tou Thao and J. Alexander Kueng are charged with aiding and abetting murder and manslaughter in the 2020 killing. Judge Peter Cahill earlier this month postponed their trial until January, saying it would improve prospects for a fair trial. He settled on October during a hearing Tuesday. The killing of Floyd, who was Black, sparked protests in Minneapolis that spread worldwide in a reckoning over police brutality and discrimination involving people of color.