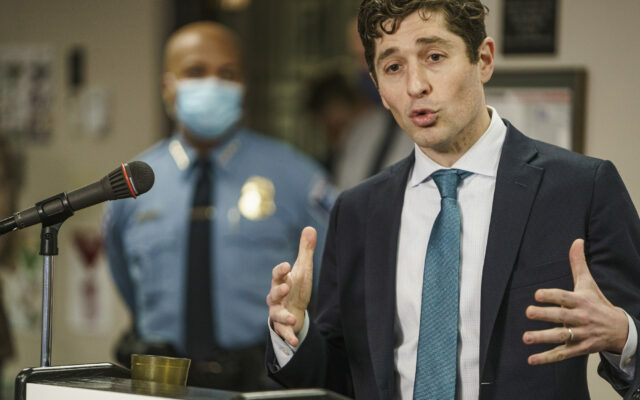 FILE - In this Feb. 17, 2021 file photo, Minneapolis Mayor Jacob Frey addresses the media in Minneapolis. From COVID-19 to a budget shortfall, and from the death of George Floyd to the more recent death of a 6-year-old girl from gun violence, the mayor of Minneapolis says his city has experienced one trauma after another in the last year — and the city's Black community has felt the pain the most. (Richard Tsong-Taatarii/Star Tribune via AP, Pool File)

MINNEAPOLIS (AP) — Minneapolis voters have reelected Mayor Jacob Frey after a bitter race that focused on calls for changes to policing and racial justice.

More than a dozen candidates ran to be mayor, including many who took issue with the way the Democratic incumbent has handled changes to the police department since one of its officers killed George Floyd last year.

Frey positioned himself as an opponent of an effort to eliminate the police department and of the most vocal liberals who were seeking a symbolic victory in Floyd’s city.

The results were announced Wednesday after Frey didn’t get enough votes in the first found Tuesday night to win outright under the city’s ranked-choice voting system.