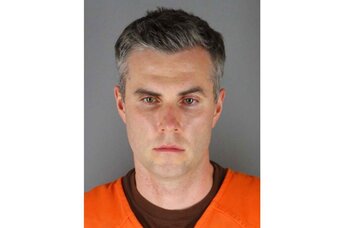 FILE - This June 3, 2020, file photo, provided by the Hennepin County Sheriff's Office in Minnesota, shows Thomas Lane is shown. Former Minneapolis police Officer Thomas Lane is hoping for a sentence Thursday, July 21, 2022, that could let him go free after as little as two years in prison for his role in the killing of George Floyd. (Hennepin County Sheriff's Office via AP, file)

ST. PAUL, Minn. (AP) — Family members of George Floyd say they’re angered at a federal judge’s sentence of 2 1/2 years for a former Minneapolis police officer convicted of a civil rights violation in Floyd’s killing. U.S. District Judge Paul Magnuson on Thursdsay sentenced Thomas Lane well below the 5 1/4 years that was the bottom of a range called for in sentencing guidelines. Prosecutors had asked Magnuson to sentence Lane to up to 6 1/2 years. They argued that Lane, who is white, had a chance to stop the restraint that killed Floyd, who was Black, but chose not to. Philonise Floyd, one of Floyd’s brothers, called it “insulting that he didn’t get the maximum amount of time.”