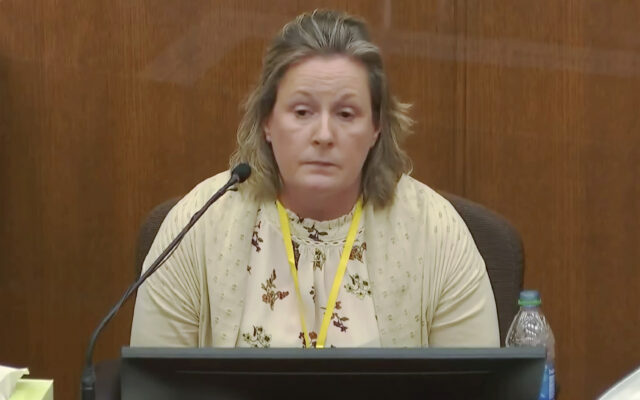 In this screen grab from video, former Brooklyn Center Police Officer Kim Potter takes questions from the prosecution as she testifies in court, Friday, Dec. 17, 2021 at the Hennepin County Courthouse in Minneapolis, Minn. Potter is charged with first and second-degree manslaughter in the April 11 shooting of Daunte Wright, a 20-year-old Black motorist, following a traffic stop in the Minneapolis suburb of Brooklyn Center. (Court TV, via AP, Pool)

MINNEAPOLIS (AP) — The former suburban Minneapolis police officer who said she confused her handgun for her Taser when she killed Daunte Wright will be sentenced Friday for manslaughter.

Kim Potter was convicted in December of both first-degree and second-degree manslaughter in the April 11 killing of Wright, a 20-year-old Black motorist. She’ll be sentenced only on the most serious charge of first-degree murder, which carries a presumptive penalty of just over seven years in prison.

Prosecutors have said the presumptive sentence is proper, while the defense is asking for a lesser sentence, including one of probation only. Potter is expected to make a statement at her sentencing hearing. Victim-impact statements are also expected to be read.