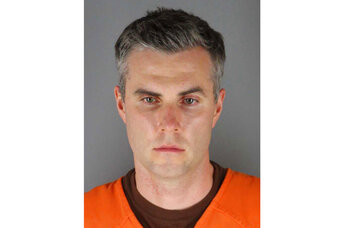 FILE - This image provided by the Hennepin County, Minn., Sheriff's Office shows Thomas Lane, who was sentenced to 2 1/2 years for violating George Floyd's civil rights. The former Minneapolis police officer who pleaded guilty in May 2022 to a state charge of aiding and abetting second-degree manslaughter in the killing of Floyd is scheduled to be sentenced Wednesday, Sept. 21, 2022. (Hennepin County Sheriff's Office via AP, File)

MINNEAPOLIS (AP) — A former Minneapolis police officer who pleaded guilty to a state charge of aiding and abetting second-degree manslaughter in the killing of George Floyd has been sentenced to three years. Thomas Lane is already serving a 2 1/2-year federal sentence for violating Floyd’s civil rights. Prosecutors and Lane’s attorneys previously agreed to a recommended state sentence of three years, and prosecutors agreed to allow him to serve that penalty at the same time as his federal sentence, and in a federal prison. Lane appeared at his hearing Wednesday via video from the low-security federal prison camp in Littleton, Colorado. The killing, captured on widely viewed bystander video, sparked protests worldwide as part of a reckoning over racial injustice.