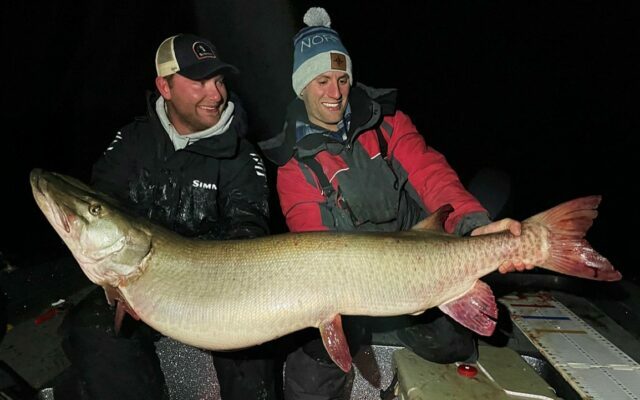 It’s been more than six decades since Minnesota’s muskellunge record was set, but there’s officially a new giant on top.

The monster fish, weighing in at 55 lbs, 14 oz, was caught by Nolan Sprengeler at Mille Lacs Lake on Nov 22.

Sprengeler and his friends Kevin Kray and Zack Skoglund planned to fish that afternoon until after moonrise, but low and frozen waters delayed the adventure until after sunset.

Sprengeler said it was during the final stop of the evening that he felt a tap on his line.

“I fought the fish to the boat and Kevin Kray netted it for me,” Sprengeler recalled. “The fish measured 57.75 inches by 29 inches.”

Sprengeler said the friends tried to revive the fish for about an hour before realizing she wasn’t going to make it.  So the group decided to take the fish to be weighed on a certified scale with witnesses the next morning.

The Minnesota Department of Natural Resources has officially certified the fish as the new muskie state record.

The previous muskie record in Minnesota was set in 1957 when a 54-pound muskie was caught in Lake Winnibigoshish.