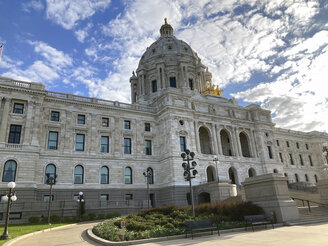 FILE - Clouds float over the Minnesota State Capitol in St. Paul, Minnesota, on Monday, May 23, 2022. More than one-quarter of state lawmakers whose seats are up for election across the U.S. are guaranteed to be gone from office next year — a statistic almost certain to grow when the votes are counted from the November general election. (AP Photo/Steve Karnowski, File)

MINNEAPOLIS (AP) — Democrats have taken control of both chambers of the Minnesota Legislature, putting the party in full control of state government for the first time since 2014. Republican Senate Majority Leader Jeremy Miller conceded Wednesday morning that his party had lost its majority to Senate Democrats. That followed a concession earlier Wednesday from GOP House Minority Leader Kurt Daudt and the re-election of Democratic Gov. Tim Walz on Tuesday night. While several legislative races were yet to be called as of Wednesday morning, Democrats appeared to be on pace to exceed the 68 seats they need to preserve their House majority, while Democrats appeared to have the 34 seats they need to control the Senate.