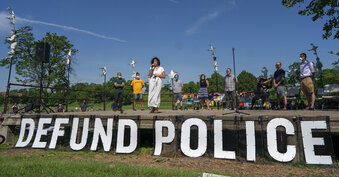 FILE - In this June 7, 2020, file photo, Alondra Cano, a city council member, speaks during "The Path Forward" meeting at Powderhorn Park in Minneapolis. The focus of the meeting was the defunding of the Minneapolis Police Department. (Jerry Holt/Star Tribune via AP, File)

MINNEAPOLIS (AP) — A proposal on the Minneapolis ballot about the future of policing in the city where George Floyd was killed has its roots in the “defund the police” movement. And it has centrist Democrats worried that it could spell defeat. The fight is a microcosm for what’s been happening across the country as communities debate policing amid the nationwide reckoning on race that followed Floyd’s death under the knee of a Minneapolis police officer. Republicans are still hammering Democrats for anything that smacks of defunding the police as they seek to win suburban voters. Only the most progressive Democrats still embrace the slogan. The proposal is slated for the Nov. 2 election.