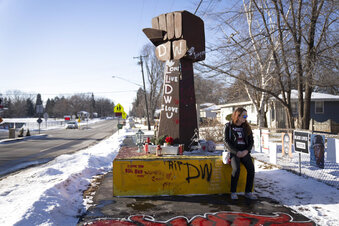 Zoey Seely, who lives in the neighborhood, sits at the memorial for Daunte Wright, after the guilty verdicts for Kimberly Potter were read on Thursday, Dec. 23, 2021, in Brooklyn Center, Minn. Plans to take down the memorial at the suburban Minneapolis intersection where Wright was fatally shot by a police officer are on hold after his family complained. (Renée Jones Schneider/Star Tribune via AP)

BROOKLYN CENTER, Minn. (AP) — Plans to take down a memorial at the suburban Minneapolis intersection where Daunte Wright was fatally shot by a police officer are on hold after his family complained. Wright’s mother, Katie Wright, said she, her husband, and the family’s attorney will meet with Brooklyn Center officials on Tuesday. She told the Star Tribune that the memorial is “not hurting anybody but it will hurt a lot of people taking it down.” Daunte Wright was killed on April 11 after Brooklyn Center officers pulled over the 20-year-old Black man for having expired license tags and an air freshener hanging from his rearview mirror. Kim Potter said she confused her handgun for her Taser when she shot Wright. She was sentenced last month to two years in prison.