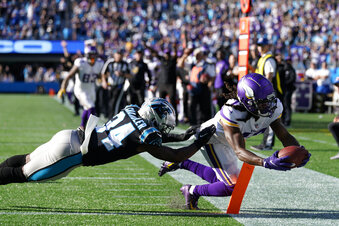 CHARLOTTE, N.C. (AP) — Kirk Cousins completed a 27-yard touchdown pass to K.J. Osborn on the first possession of overtime to lift the Minnesota Vikings to a wild 34-28 victory over the Carolina Panthers. Cousins threw for 373 yards and three touchdowns against the league’s top-ranked pass defense, Dalvin Cook ran for 140 yards and a score and the Minnesota Vikings finally appeared to solve their second-half offensive woes. Adam Thielen had a number of big catches, finishing with 11 receptions for 126 yards and a touchdown. The Vikings had not scored a second-half touchdown in their previous four games, but the Vikings had three offensive scores after halftime.