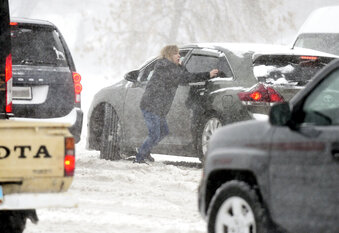 A woman tries to push a stuck car in the snow at the intersection of State Street and Divide Avenue in Bismarck, N.D., Tuesday, April 12, 2022. (Mike McCleary/The Bismarck Tribune via AP)

BISMARCK, N.D. (AP) — Spring storms moving through the Upper Midwest, including a blizzard and a possible tornado, have forced the closure of the North Dakota Capitol, schools and roads, and tore up a small town in Minnesota. The National Weather Service says a possible tornado took the roofs off houses, destroyed grain bins, snapped power lines and lifted a house off its foundation in Taopi, Minnesota, late Tuesday. There were no reports of serious injuries. The North Dakota state Capitol in Bismarck, along with scores of schools, government offices and roads, remained closed Wednesday due to the blizzard. Two feet of snow was expected to fall by Thursday.