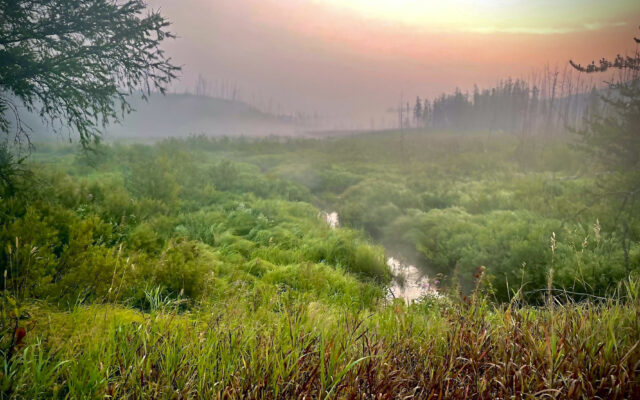 This image provided by the USDA Forest Service, shows a smoky, foggy sunrise along the Gunflint Trail on Tuesday, Aug. 24, 2021, in Superior National Forest in northern Minnesota. Residents well to the north along the upper Gunflint Trail, a dead-end highway that's a popular jumping off spot for Boundary Waters trips, were told Monday night to stand by in case they also needed to evacuate because of wildfires. (Sarah Shapiro/USDA Forest Service via AP)

ISABELLA, Minn. (AP) — Authorities say a vast majority of the Greenwood Lake wildfire in northern Minnesota is contained, one month after lighting ignited the blaze in the Superior National Forest.

The U.S. Forest Service reported that the nearly 27,000-acre fire was 67% contained as of Sunday morning. The Forest Service had said last week that the fire was nearly half under control as hundreds of firefighters were still being dispatched to the area.

The fire started Aug. 15 about 10 miles southwest of Isabella. It has destroyed 14 cabins and homes along with 57 outbuildings. Authorities say the fire is not expected to grow now that cooler weather is moving into the Great Lakes region.