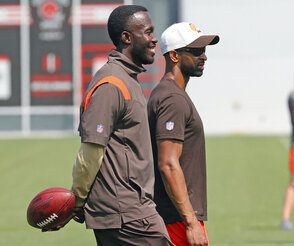 Cleveland Browns Vice President of Football Operations Kwesi Adofo-Mensah, left to right, and GM Andrew Berry watch the action from the sidelines at training camp, August 27, 2021, at CrossCountry Mortgage Campus in Berea, Ohio. Adofo-Mensah has emerged as the front-runner for the Minnesota Vikings' general manager job. Adofo-Mensah was in Minnesota for his second formal interview with the organization on Tuesday, Jan. 25, 2022. (John Kuntz/Cleveland.com via AP)

MINNEAPOLIS (AP) — According to a person with knowledge of the process, the Minnesota Vikings have hired Kwesi Adofo-Mensah as their general manager. The person spoke to The Associated Press on condition of anonymity because the Vikings had not yet announced the decision. The team is taking an innovative turn by bringing in an analytics expert from Cleveland’s front office who once worked on Wall Street. The 40-year-old Adofo-Mensah was vice president of football operations for the Browns for the last two years.