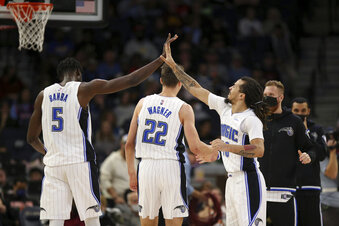 MINNEAPOLIS (AP) — Cole Anthony scored a season-high 31 points and Wendell Carter Jr. chipped in 15 points and 14 rebounds as the Orlando Magic came from behind to beat the Minnesota Timberwolves 115-97 on Monday night. Franz Wagner had 28 points for Orlando, which snapped a four-game losing streak, while Minnesota native Jalen Suggs scored 15 points. Karl-Anthony Towns had 23 points and 16 rebounds for Minnesota, which played the second half without starting point guard D’Angelo Russell because of a right ankle sprain. Russell finished with three points and three assists in 17 minutes.