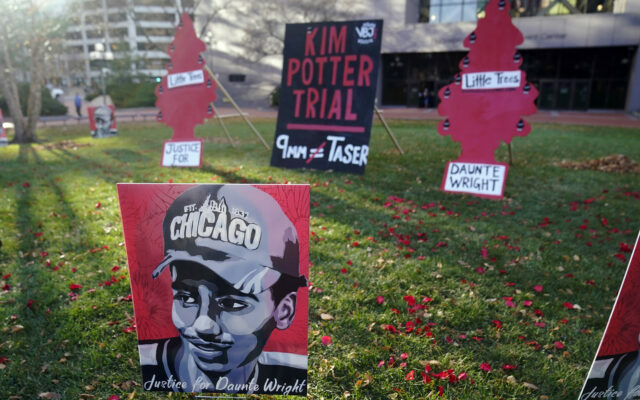 Posters stand on the south lawn Tuesday, Nov. 30, 2021 at the Hennepin County Government Center in Minneapolis where jury selection begins for former suburban Minneapolis police officer Kim Potter, who says she meant to grab her Taser instead of her handgun when she shot and killed motorist Daunte Wright. (AP Photo/Jim Mone)

BROOKLYN CENTER, Minn. (AP) — A suburban Minneapolis city has agreed to pay $3.2 million to the family of Daunte Wright, a Black man who was fatally shot by a police officer who said she confused her gun for her Taser.

Attorneys for Wright’s family said Tuesday the tentative settlement also includes changes in police policies and training involving traffic stops like the one that resulted in Wright’s death. Brooklyn Center Officer Kimberly Potter, who is white, shot Wright after the 20-year-old was stopped for expired registration tags in April 2021.

The former officer was subsequently convicted of first- and second-degree manslaughter and was sentenced to two years in prison. The Associated Press left a message Wednesday seeking comment from the mayor’s office.